Thank you! Your submission has been received!
Oops! Something went wrong while submitting the form.

Sign up to be notified when new chapters are released. 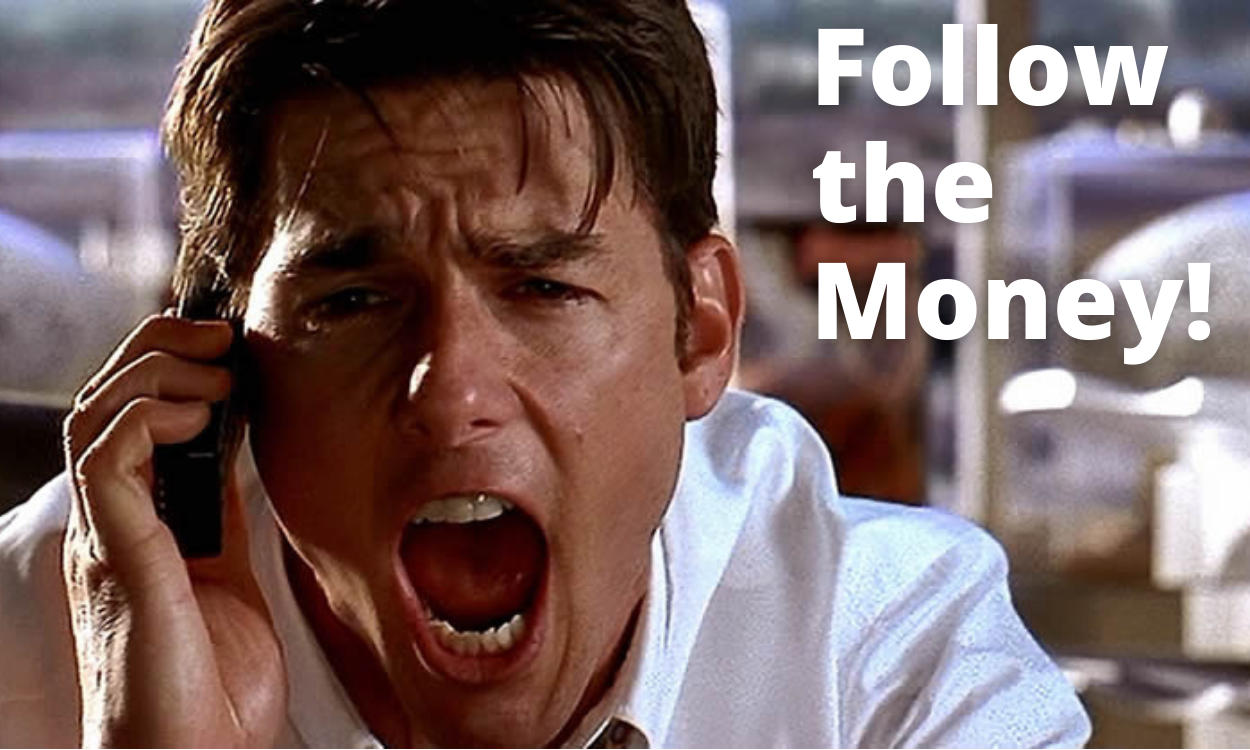 This is Part 1 of our two-part series on Supplier Extensions. For Part 2 click here.

Extending through the value chain is the frontier. It has only been successfully executed by a select few, but we believe it is the long-term future of vertical software. Pushing beyond being a simple tool to being a multi-stakeholder platform is the way a Vertical SaaS Vendor (“VSV”) can go from being a good company to a once-in-a-generation organization.

And with the supplier is the best place to try it.

Extending to the supplier is a classic “follow the money” play where you benefit from your merchant’s buying power. At Ariba (case study coming soon), they used to say that “it’s always good to follow the golden rule: she with the gold rules!” There’s also an opportunity for the VSV to reduce friction, add value to the transaction, and sell to the supplier stakeholders – which are mostly businesses, as opposed to individuals.

Supplier extensions can be lucrative for a VSV, with take rates from 0.5% to 3% of GMV. For those VSVs who successfully build a two-sided marketplace model, rewards are even greater, with a typical take rate of 3-15% on large GMVs. While still not commonplace, there are more examples of VSV extensions to two-sided marketplaces than in consumer or employee: Ariba (e-procurement), where my co-author Bob Solomon ran Supplier Enablement; GHX (healthcare); Avetta (supplier credentialing), where I am an investor and on the board through my prior firm; AvidXchange (AP Automation); and ACV Auctions (wholesale auto auctions). These companies derive revenue from both sides of a B2B transaction and have made their customers and shareholders quite happy.

As a special treat, I am joined in this essay by Bob Solomon, a longtime SaaS executive and friend, whose mind I deeply admire. We’ve written a two part essay.

In Part 1 below, we will apply our extension framework to the supplier opportunity. We’ll walk through the merchant side steps required to extend to the supplier, including:

In Part 2, we’ll walk through building out a footprint with suppliers:

A merchant’s most important jobs to be done with its suppliers are:

In the enterprise world, this is called the source-to-settle process. In markets where the merchants are small and the suppliers large (such as the relationship between restaurants and mainstream food distributors), the emphasis is usually on transactional efficiency, since negotiating power on price and payment terms may be limited. In other situations, the aggregate purchasing power of a VSV’s merchants can provide significant negotiation leverage; we will talk more on this later.

Generally, the best starting point is procurement. It is the direct transaction workflow, and by its position at the beginning of the purchasing process, it allows a VSV to continue to move deeper into various aspects of the merchant and supplier relationship (see table below).

Most supplier extensions become more compelling as the VSV gains scale in the merchant community. As scale increases, the group of merchants increasingly enjoy strong network effects. VSVs can utilize these communities in multi-player offerings. Let's go through some examples.

A VSV often has a lot of data on an industry’s transactions—more than any other single participant—that could be used for benchmarking or industry analytics.

Benchmarking businesses are great companies that get stronger with scale. However, these companies are notoriously tough to build because there is at least some resistance on both sides of the transaction that you’ll need to surmount. Merchants can be reluctant to share their information with other merchants whom they see as competitors, and suppliers hate to have their price and terms information with one buyer disclosed to another!

These hurdles can be overcome through anonymization, aggregation, give-to-get schema (co-opt models), sharing of non-price data (e.g., risk data), and consortia ownership models – or in industries where either merchants do not see themselves as competitors (e.g. hospitals and utilities) or the subject matter is non-strategic (e.g. compliance). Generally, we have also found it to be easier in verticals that are more fragmented.

Examples of companies that have built great benchmarking or data-sharing businesses are:

A variant of benchmarking is compliance and credentialing. In some industries, a VSV can get large and credible enough to become a true industry standard. In such a case, the cross-side network effects are powerful. Merchants seek, and can rely on, the ratings the VSV has collected on suppliers, and suppliers can market themselves to new merchants using the VSV’s rating. eBay ratings, D&B, Moody’s, and Morningstar all come to mind as examples of this phenomena. These standards can become embedded in an industry and make supplier search or merchant creditworthiness much easier to evaluate, which will become crucial to a functioning marketplace. If you are looking for attributes to consider, some of the more popular ones include credit worthiness, beneficial ownership (e.g., KYC/AML), reputation, safety, ESG, cyber risk, and insurance.

These businesses use all the same techniques benchmarking companies do to overcome the hurdles inherent in data-sharing. They may also leverage open data (from governments) or specialize in public sector businesses. Examples of industry analytics businesses include IRI and Nielsen in consumer packaged goods, Panjiva (acquired by S&P) in import/exports, and Moody’s Kompany (acquired by Moody’s) in KYC/AM.

The difference between benchmarking and analytics companies is one of scale. If a company becomes the industry standard, its stickiness, market influence, and monetization opportunity is that much greater.

In an industry where the merchants are small businesses and their suppliers are much larger, a group purchasing organization (GPO) can be an effective and natural multiplayer offering to leverage collective buying power to buy at lower prices and better terms. If executed well, a VSV’s GPO can drive serious volume for suppliers and remove the cost of selling and negotiating with thousands of merchants individually.

GPOs are prevalent in healthcare (e.g., GHX), but also exist in public sector procurement (e.g., Omnia), hospitality/food services (e.g., Avendra, which was acquired by Aramark for $1.35 billion) and other industries. Even Coupa, a procure-to-pay player, has introduced a light GPO called Coupa Advantage.

GPOs often have net revenues of 1-2% of GMV. Both Avendra and Premier report 50% EBITDA margins. Adding 50 bps of an industry’s spend to EBITDA is very attractive to a VSV.

The best GPOs do more than aggregate merchant demand for negotiation leverage. Superlative GPOs offer vertical-specific supply and add value to the transaction. In particular, a VSV that has launched a GPO is in a great position to offer the latter: a VSV is well positioned to provide communication, collaboration, content, quality, certification, and pricing benchmarks to greatly improve a transaction. If a VSV also has payment capabilities, it can add even more value by accelerating funds, providing credit, or contingent payments.

This essay is the first step—solve your merchant customer’s most important job-to-be-done with its supplier. What comes next is the frontier and the payoff—landing a wedge offering with the supplier. You can then use that wedge to extend through the value chain and sell more broadly to the supplier. We cover that in Part 2.

We love the idea of bringing together a community to explore the boundaries of Vertical SaaS and are excited by what we can learn from each other. If you have thoughts or comments or want to get involved, reach out to us at knowledge@tidemarkcap.com.

Case studies related to this chapter:

Thank you! Your submission has been received!
Oops! Something went wrong while submitting the form.

EXTEND THROUGH
THE VALUE CHAIN

Get the VSKP delivered to your inbox.  Each week, we'll send one strategy essay along with related case studies to help you make sense of it all.

The information presented in this post is for illustrative purposes only and is not an offer to sell or the solicitation of an offer to purchase an interest in any private fund managed or sponsored by Tidemark or any of the securities of any company discussed. Companies discussed in these posts may include current Tidemark portfolio companies and/or prior investments made by Tidemark employees while at other investment firms. These companies identified above are not necessarily representative of all Tidemark investments, and no assumption should be made that the investments identified were or will be profitable. The information in this post is not presented with a view to providing investment advice with respect to any security, or making any claim as to the past, current or future performance thereof.

Keep up with the VSKP